In this tutorial I wanted to take a look at a couple of techniques for an exploding text effect. I knew going into this tutorial that I wanted a thick heavy font with portions that are corroding and breaking apart with various explosions, and I want some dramatic lighting to punch it up a bit. Below is a preview of what we'll be creating. 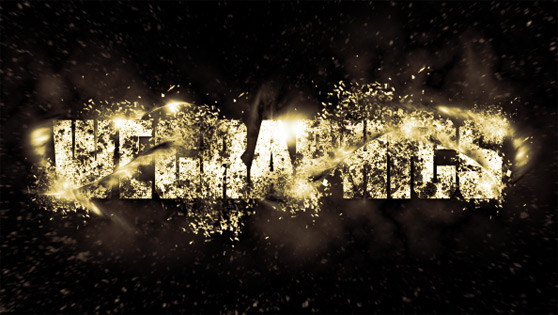 Choose a nice heavy font. I chose a font called Tank. You can purchase it here if you don't already have it. Create a new square document in Photoshop, 1200x1200 pixels at 300 dpi. Make the background black and enter some text in white. 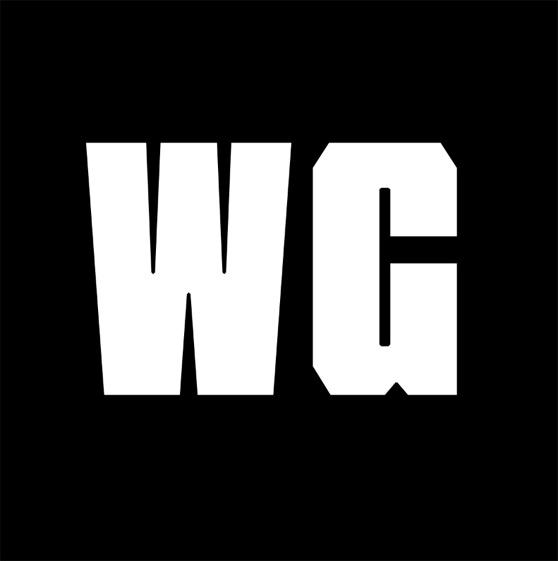 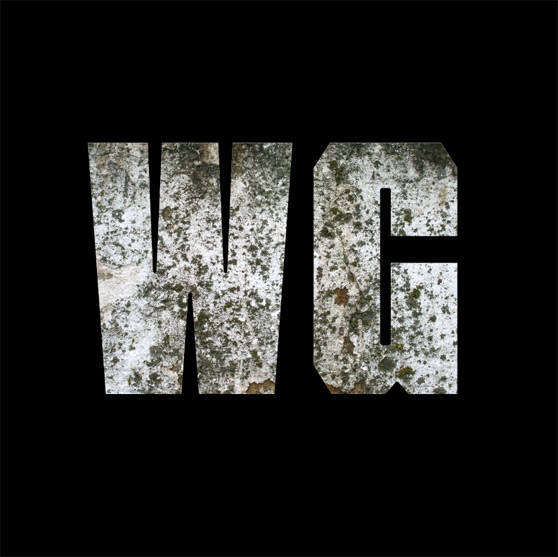 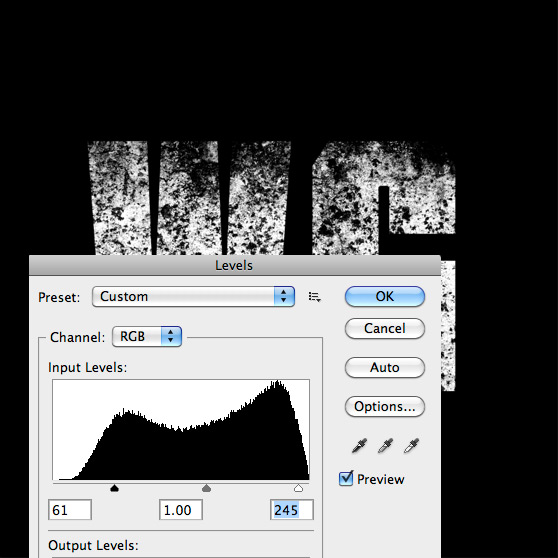 Now we need to add a subtle background. Make a freehand selection around the text with the Lasso Tool (L). Then feather the selection (Select | Modify | Feather) by 50 pixels. Fill the selection with solid black on a new layer behind the text. Then select (Filter | Render | Difference Clouds). You may need to repeat the Difference Clouds a couple of times before you are happy with the results. Set the opacity of the clouds layer to 50%. 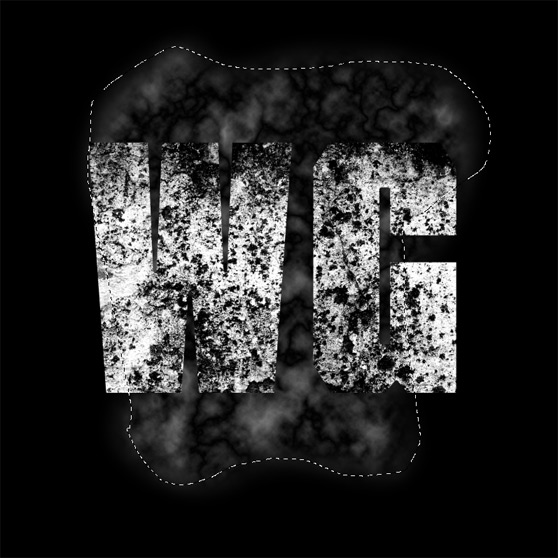 Now it's time to start removing some of our letters to create the explosion effect. Download the Free 3D Explosion Brush Set from WeGraphics. I used only the brush below for all of the explosions in this piece.

Instead of loading it as a brush load it as your Eraser (E), scale it down to around 200, begin erasing portions of the text with a single click each time. 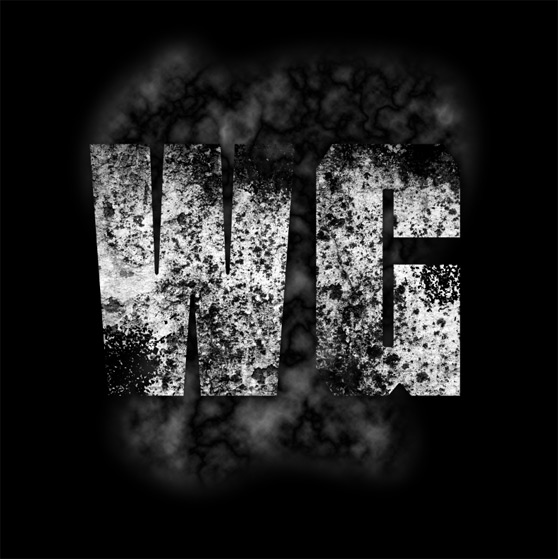 Now on a new layer behind the text select your Brush Tool (B), color set to white, and sized around 600-800 and begin adding the exploding areas around the portions that you erased. 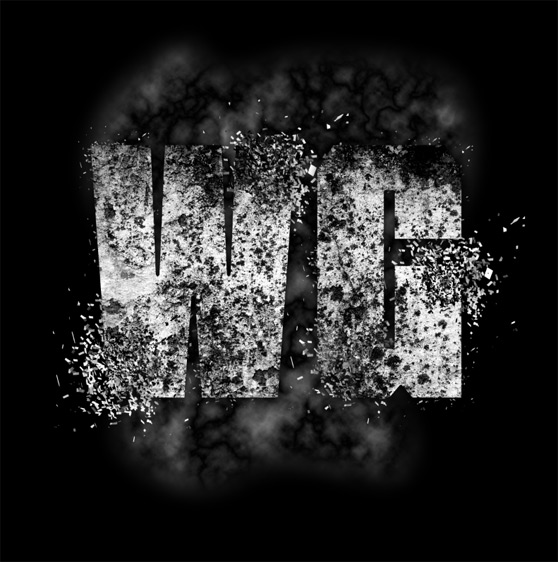 Now lets begin adding some of the lighting effects. I decided that I wanted to make streaks of light that appear to be breaking the text up. To do that, I created a new layer and drew an oval selection with the Elliptical Marque Tool (M). Same as before, I feathered the selection by 30, filled it with black on a new layer, and rendered Difference Clouds 2 or 3 times. 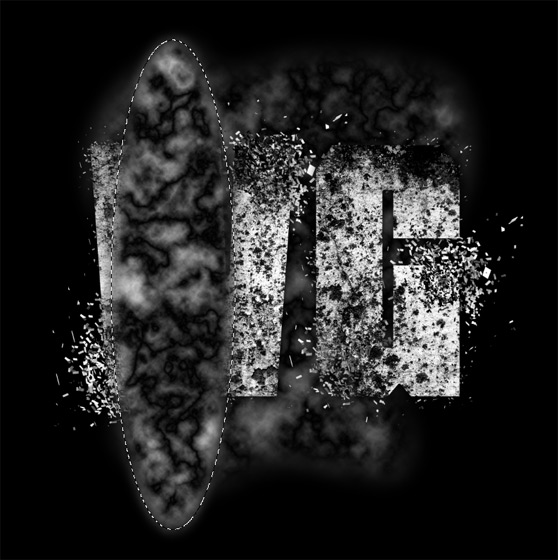 Next we need to reshape the light streak using the Warp Tool (Edit | Transform | Warp). Create an arc that you can place around the letters. The goal here is to make it look as though the streaks of light are moving around the letters. 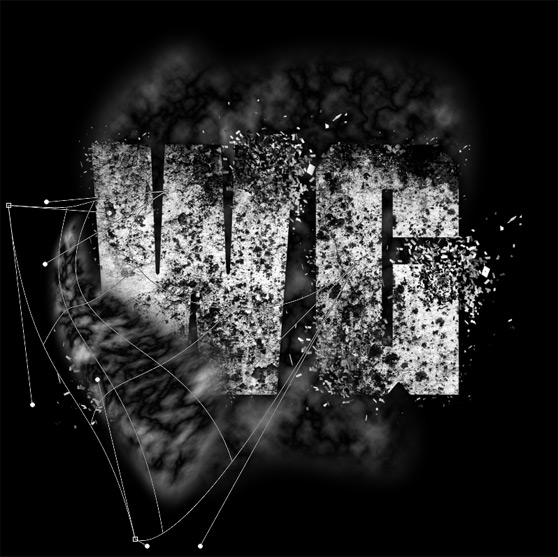 Once you get the shape right with the Warp Tool duplicate it several times and move, rotate and scale it around the letters to correspond with your explosions. You may need to add a layer behind the text for some of these streaks. I also erased some areas on the streaks to make them appear as though they are coming through the explosions. 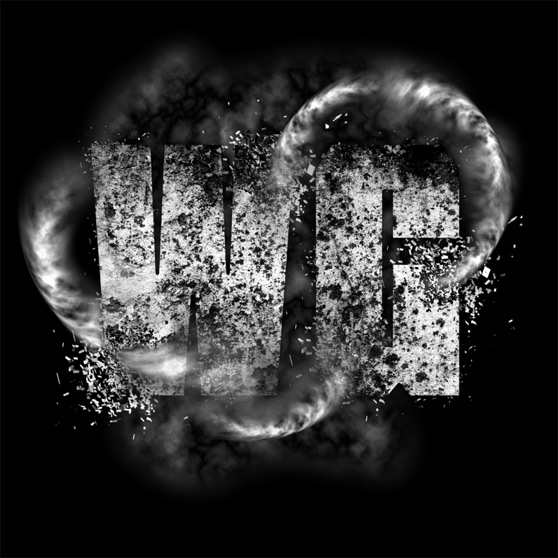 I want to add a bit more to the overall explosion effect. Right now the bang is not quite big enough. In order to accomplish this I grabbed a brush from the Perfect Grunge Brush Set, and added it to a layer above all others. I then added a Radial Blur (Filter | Blur | Radial Blur) to the layer using the following settings. 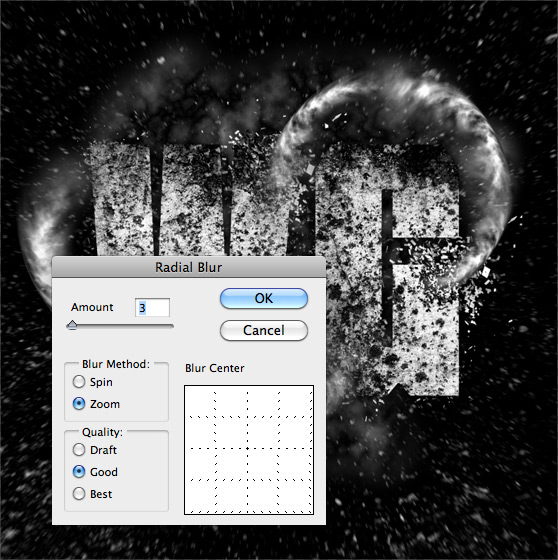 Next let's add a bit of color to the document. On a layer above all of the others let's add a new Gradient Map Adjustment Layer. I used the following settings for my gradient.

Below are the results of my coloration. The subtle orange hue gives the letters a bit of a metallic feel, which I like. 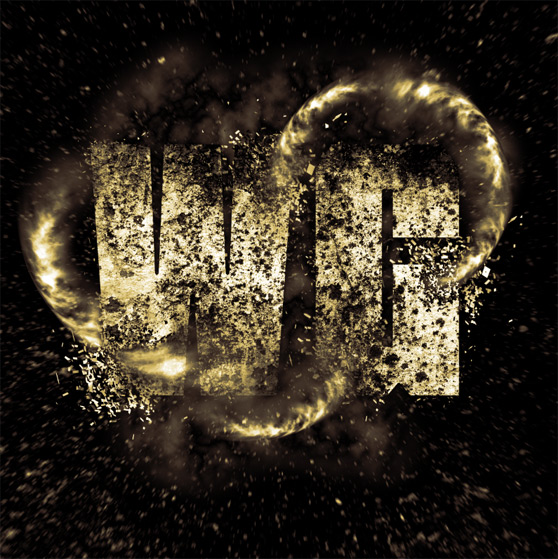 For the final step, lets add a bit of lighting around the streaks we added earlier. To accomplish this, lets create a new layer above your streaks and begin clicking with a soft white brush. Vary the brush in sizes from around 200-400. To light the explosion areas, I created a new layer behind the text and used the same soft white brush.

That's all there is to it. I'd love the hear what you think of these simple techniques. And feel free to share your results with us using the comment fields below.

How to Easily Make a Pop Art Effect in Photoshop

Back in the 60's, new artistic movement known as "Pop Art" emerged from various artists, such as Andy Warhol and Roy Lichtenstein. The aesthetics of this movement is still used today in various designs, though mostly digitally. So today, I will show you how you can replicate the aesthetics of Pop Art in Photoshop using any photo you want and with the default tools and filters.

How To Easily Make Die Cut Lines in Illustrator

At some point you may faced the challenge to get your files ready to print on a printing company, and you may have noticed that there are a few instructions on how to setup your file to guarantee a perfect result. Making folding and cutting lines, converting text to curves and many more instructions could be a bit confusing if you don't know how to properly make them, so today, I will show you a very easy way to make die cut lines on Illustrator so you can send your sticker files with confidence that they will be cut correctly and you get the exact result you are looking for.

How to Easily Make a Fake Window Reflection in Photoshop

Adding glass reflections to an image to make it look like the picture was taken through a window is a very easy process if you use the right tools in Photoshop. Of course, there is more than a way to make this effect, but the one I will show you today will let you control how much of the reflection you want to show even after the effect is made. Also, you will be able to change both the subject and the reflection after we complete this tutorial just by replacing the Smart Objects we will use/create.

How to Easily Make a Black Moody Photo Effect in Photoshop

You probably saw a lot of images on the internet with a black moody color grading that are often used on Instagram and many different backgrounds and advertisings. That kind of image effect can be easily made in both Photoshop and Lightroom and can be used over any image. So today, I will show you a very easy way to make this kind of black moody color grading in Photoshop by using only the Camera Raw filter (and you can use these exact settings in Lightroom to get the same effect).