After 2 months of hard work, we finally launched the new design! Our Twitter and Facebook followers may have heard we were working to refresh WeGraphics interface. We published some sneak peeks on Dribbble too. Today I want to explain the motivations behind this new look and why it will rock! There is always a time in the life of a site to change clothes. Even if we loved the old WeGraphics design, we had to improve some site usability features. When we decided to work on a new look, we had a fundamental aim in mind: to make it cleaner. Grunge and textures are cool, but oll those dirty effects were a bit in conflict with the aim to put in evidence our resources for sale. In February we reached more than 500000 impressions. Visitors number is a variable to highly consider when designing a site...so less textures, less weight, less color contrast, but always with our style!

Let's compare the old version of the site with the new one, starting from the homepage:

The color palette is the same, however we decided to switch the header color from orange (a bit obtrusive) to a more subtle one, in greyscale tones and with a cool pattern. Content distribution is almost the same, the only thing we wanted to modify was the tagline. This area is the first thing that attracts user's attention, so we tried to put a clear message in few words with an illustration on the right. Instead of the large tagline with the same font used for the old sentence, we preferred a nice type combination and two mega action buttons. The illustration was the most tricky part. I wanted it to stand out, but at the same time to not distract the users from the action buttons. S0 I opted for a "not-so-realistic" toolbox with 2 funny mechanical arms, which matches the design pretty fine. 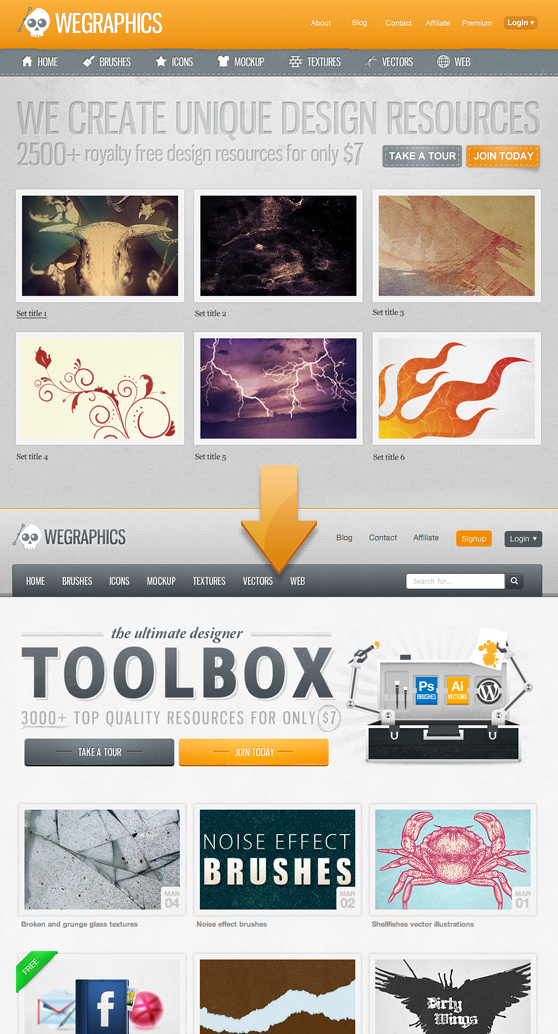 This is the core of our theme. People generally need few seconds to decide if to buy the resource or not. With the lighter background, the 2 action buttons are now in high evidence. I decided to give depth to the buttons, and make them clean and with a touch of noise. 2 new details: small icons replace text near the general files info; the author box is displayed in the sidebar, immediately below the file description. The author's name looks as if it was written by the the author himself.

The blog area looks much more cleaner than the previous version. We replaced some buttons with jQuery effects, and tried to make user navigation the most easy possible. We are investing a lot in the community side of WeGraphics, also thanks to the great work of Nathan Brown, our blog editor. In the next weeks we will add more features aimed at increasing the users interactions and participations. So stay tuned guys! 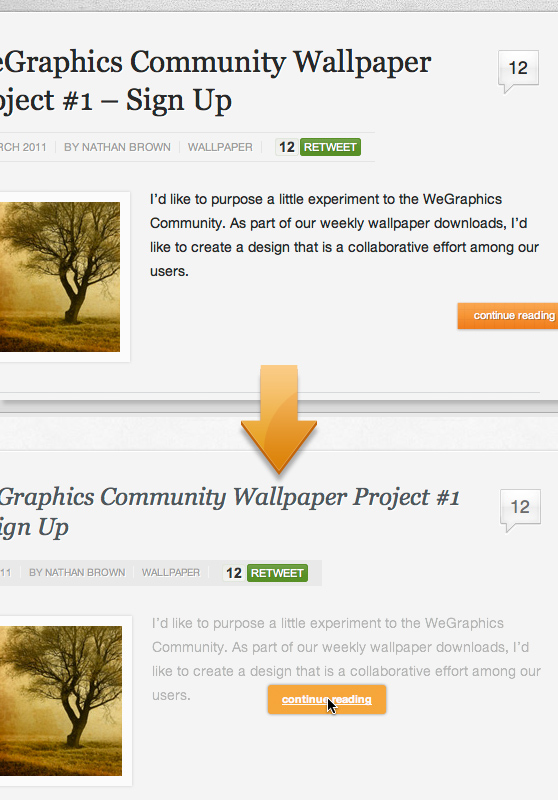 What do you think of the new design?

As always, we'd like to hear your thoughts. Do you like the new design? Would you like to change something? New features, new resources we should add?